The Story of Mollie & Her Famous Gold Mine 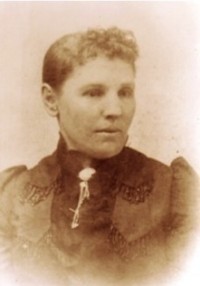 As handed down by descendants of Mary Catherine Gortner

In the spring of 1891 Mollie’s son Perry arrived in the Cripple Creek area employed as a surveyor assigned to map mining claims of this country’s newest and overlooked frontier.   With all news of the day focused on Cripple Creek’s gold.   Mollie loaded the family wagon with supplies and joined the next wagon train heading west up Ute Pass to visit her son.  After a four day trip, Mollie was relieved to find Perry had completed construction of a half log half canvas field tent.  Mollie waisted little time setting up housekeeping.

In September of that year (1891), Perry while surveying upper Poverty Gulch, saw a huge herd of elk. Later he told Mollie of the herd so she headed out to see for herself.  As she made her way up Poverty Gulch (three hundred yards past Cripple Creek’s first gold strike--- Bob Womack’s Gold King Mine---,) winded Mollie decided to rest.

Looking downward,as she caught her breath, Mollie noticed an interesting rock formation that winked back at her.  Using a rock to break off a sample, she could hardly believe her eyes, the outcropping was pure gold laced in quartz.

With her heart racing Mollie nonchalantly hid gold samples amongst her clothing, she had to be calm, there were a number of prospectors in the area.   Earlier that day  Mollie had mingled with Bob Womack whom had overlooked her find for more than a dozen years prospecting an area he had nicknamed Poverty Gulch.

By her determined act, Mollie Kathleen Gortner became the first woman in the Gold Camp to discover gold and strike a claim in her own name. This was clearly a bold move out of step with the times. Most men of the time, only named their horses, jack asses, and mines after their women, it was very uncommon to let a woman claim something of such value.

Even after her mine was in production and when visited by the National Geological Survey, it’s authors entered their report of the mine being  “Discovered by Mr. M.C. Gortner” Mr. Gortner’s name was Henry - - - Mollie’s name was Mary Catherine Gortner.   Mollie Kathleen Gortner Died in 1917.   Henry would later die of a broken heart one short year later.  Perry Gortner was left 1/3 interest in his mother’s gold discovery and was managing operator of the Mollie Kathleen until his death in 1949.   The Gortner family lay to rest in Evergreen Cemetery Colorado Springs, CO. 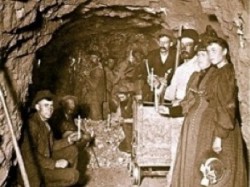 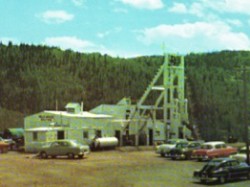 Mollie Kathleen in the early 50's 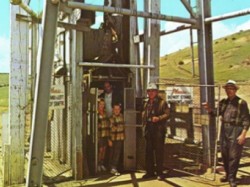 Descending a mine shaft 1,000 feet in an open ore bucket

From the early beginnings of the Mollie Kathleen Mine, many passersby would often wander in, pleading to tour the underground mine.  Visitors without hesitation rode an open ore skip.  With no side or head protection, they traveled the depth of the 1,000 foot mine shaft to and from mine workings.  Miners would take turns guiding complete strangers underground, by candle light, to witness fellow workers extracting gold ore.  Once the word got around that people off the street could descend the shaft and tour 1,000 feet underground, demand rapidly grew to the point that tours became disruptive to mining operations.

Early-day mine tours were by candle light

With the introduction of air drills, mining activities became less tedious and more interesting. With more noise and increased production, visitors witnessed more aggressive mining activities.  With increased public persistence a decision was made to conduct tours on the 700 foot level.  This allowed miners to drill rounds and load explosives on the 1,000’ level during the day.  At night  explosives  were loaded, rounds were shot, ore was mucked, trammed and hoisted to the surface .  Disruption of mining by touring visitors soon forced a decision to completely separate touring and mining activities.   Tours were to be conducted by day  and all mining activities would continue at night.

Mining continued  until 1961 when the Carlton Mill closed.   With no way to process ore  the Mollie, along with all other working mines of the Cripple Creek  District, were given little choice other than to halt gold production.  Mine tours at this time were doing quite well.  Rather than closing down the mine completely, a decision was made to continue tours.  Tour revenues were used to maintain the mine in safe operable mining condition.  The conclusion being, if the Carlton Mill were to reopen the mine would again be ready to  produce gold .

With the assumed temporary halt in gold production, mine owners,

used down-time to upgrade the mine facility.

with Mine Supper Franklin Ferguson were contracted to:

During this era, visitors were lowered to the 7th level for a portion of the tour, and then continued touring on the 1,000 foot level.   While being a very good tour, things became far to hectic having to wait for the man-skip on both levels.  Franklin Ferguson left the Mollie Kathleen Mine in the early 1970’s.

GOLD DISCOVERY IN A COLORADO TOUR MINE

Tom Brouckaw’s Nightly News told the world of a gold discovery in The Mollie Kathleen Gold Mine!

Though the new discovery created much excitement, there was still no practical option for processing the ore.  However, all was not lost, exploration caused  the connection of earlier underground crosscut tunnels and drifts.

With these changes came a layout for the tour.

The new 1,000 foot underground layout provided a natural solution to congestion of the two level tour, thus, a new tour lasting 30 minutes was developed for the 10th level.  Now multiple tour groups could be spaced throughout the tour area at one time.

Several new displays were placed throughout the tour area, however, due to lack of available replacement part the mine’s compressors were no longer fired-up and underground mine equipment no longer demonstrated. The new operation was very well accepted by the public, and attendance continued to grow.

With new mine operators came big improvements.  A tour that would combine

all mining phases of the Mollie Kathleen’s evolving past.

Over 15 years in the making this new tour included: 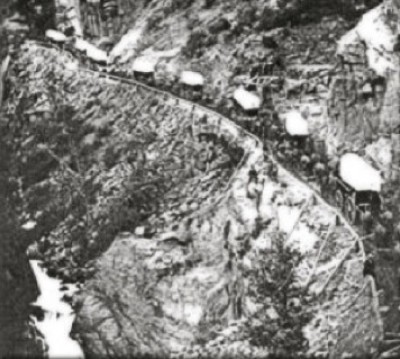